January getting you down? Want to know what festivals and events are happening this year? Here are some dates for your diary and what you have to look forward to in 2017. The time to plan ahead is now.

There are two festivals in January to help us all with the winter blues:

London’s answer to the Edinburgh festival – The Vault Festival  http://www.vaultfestival.com

If rock music is your genre: Green Day begin their tour in Leeds http://www.greenday.com/tour and Bat Out Of Hell, the musical comes to Manchester http://www.batoutofhellmusical.com

For all you country music fans head to the C2C festival in Dublin, Glasgow and London, where Brothers Osborne, Brad Paisley Chris Young and many more are performing http://www.c2c-countrytocountry.com

This month brings us the Cheltenham Jazz Festival, curated by Jamie Cullum http://www.cheltenhamfestivals.com/jazz/

The month’s main sporting event The London Marathon for active types is on 23 April https://www.virginmoneylondonmarathon.com/en-gb/

Comic and Sci-fi fans will know that MCM London Comic Con is scheduled for 26-28 May http://www.mcmcomiccon.com

Bob Dylan kicks-off his UK tour in Cardiff and there are still tickets available on http://www.ticketmaster.co.uk/Bob-Dylan-tickets/artist/734972

To round off the month, May brings us the Bath Festival filled with music and literature events http://bathfestivals.org.uk

If you are looking for a good excuse to wear a hat and your best dress head to Ascot for the races https://www.ascot.co.uk

This month is all about Glastonbury, Radiohead are headlining and the festival gets underway 21-25 June http://www.glastonburyfestivals.co.uk/information/

Tom Petty And The Heartbreakers  will be headlining at BST Hyde Park, with special guest Stevie Nicks http://www.bst-hydepark.com 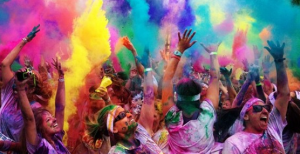 We are now in full festival season with the Nass Festival near Bristol http://www.nassfestival.com

If you want to avoid the festival scene, and tennis is more your thing, head to Wimbledon 3-16 July http://www.wimbledon.com/index.html

This month sees the start of the Proms at the Royal Albert Hall http://www.royalalberthall.com

It is the 70th anniversary of the Edinburgh Fringe  https://www.edfringe.com

At the end of the month Muse will be headlining the Reading or Leeds Festival http://www.readingfestival.com

If you are not tired of festivals, September brings Bestival on the Isle of Wigt http://www.bestival.net

On Blackheath where under 12’s go free http://www.onblackheath.com and Portmeirion, Wales hosts

Out of the mud and into a more civilised setting, The BFI Film Festival is yet to confirm dates but is usually scheduled for October

There is also the Cheltenham Literature Festival http://www.cheltenhamfestivals.com/literature/

It is the month of fireworks! Blackheath’s fireworks are free http://lewisham.gov.uk/fireworks

Deep Purple  blast out Smoke on the Water for the last time as they kick-off their farewell tour in Manchester http://www.deeppurple.com

We can expect the usual Christmas treats with Hyde Park Winter Wonderland http://hydeparkwinterwonderland.com

The Nutcracker at the Royal Opera House http://www.roh.org.uk

Carols by Candlelight at the Royal Albert Hall http://www.royalalberthall.com