Every month TTA will look at a popular Central London location and give an overview on its history, architecture and the reasons to choose this area as your neighbourhood. This months location is Bankside. Before we get started here are a few facts. Although Greater London is made up of 33 Boroughs which cover 607 square miles, the much smaller area of Central London is divided up into a number of popular areas, each with a distinctive character and feel, which, often derive their names from a geographical fact, an historical event or a landmark. For example The City of London is also known as “The Square Mile” and it is the site of the original old walled city built by the Romans in the first century. The old city covered an area of roughly one square mile and was surrounded by a six metre high wall and a ditch (or moat).

From the Middle Ages, Bankside was known as ‘Stew’s Bank’ – stew being slang for brothel. Up until the 18th century the area was seen as an Elizabethan ‘red light zone’ and was home to illicit brothels, taverns and theatres. It eventually developed into London’s finest theatre district and some of England’s greatest writers and players (including William Shakespeare) lived and worked here. But the Puritans closed the theatres in 1642 and many were demolished – including Shakespeare’s Globe.

By the 19th century, Bankside was a centre of industry and warehouses and factories lined the river. After the Second World War industrial decline took place in the area and it remained largely undiscovered… until recently! The regeneration of Bankside has been impressive: the derelict Bankside Power Station became the Tate Modern in 1981; a reconstruction of Shakespeare’s Globe Theatre was built in 1997; and nearby Borough Market now attracts people from all over the city and beyond. London’s riverside has always played an important part in the capital’s work and leisure, and today it’s a must-see for anyone wanting to immerse themselves in the culture of the city.

Today Bankside is a mix of industrial and new high rise buildings with the NEO Bankside residential scheme lying in the heart of the area, located close to the River Thames and directly opposite the west entrance to Tate Modern. NEO Bankside comprises 217 residential units in four buildings ranging from 12 to 24 storeys. These four hexagonal pavilions have been arranged to provide residents with generous accommodation, stunning views and maximum daylight. The steel and glass pavilions take their cues from the surrounding area. 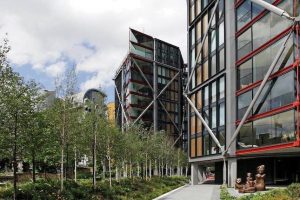 Reason’s to reside in Bankside

If you choose to reside in London’s Bankside there is a good selection of new apartments and homes to rent and buy depending on your budget and you will be in the heart of an extremely stylish district, just south of the Thames. A stunning riverside location with a real buzz about it with the world famous Borough Market on your doorstep. As culture and the Arts are so important to Bankside (and have played a major part in its history). Major attractions – including Shakespeare’s Globe and the The London Eye – are just a short stroll away, and if you cross the Millennium Bridge you can visit breathtaking St Paul’s Cathedral and the Tower of London! With the excellent London Underground transport links and London Bridge Train Station nearby, the whole of the Capital will be within easy reach. 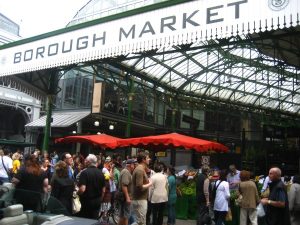