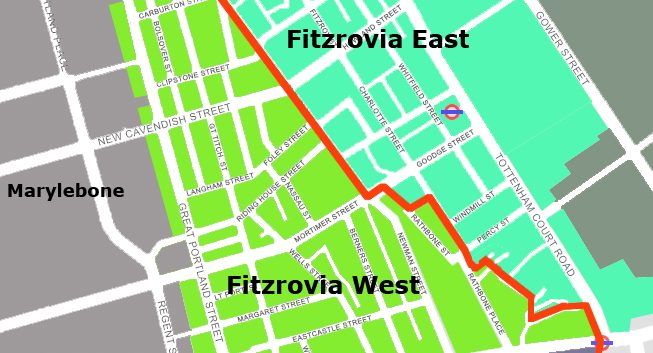 This months popular central London location is Fitzrovia. Here we give an overview on its history, architecture and the reasons to choose this area as your neighbourhood.

From the 1930’s the area between Great Portland Street and Gower Street became known to its denizens as Fitzrovia.

The locality was first developed by Charles FitzRoy, Lord of the Manor of Tottenhall, from 1757, who gives his name to The Fitzroy Tavern, Fitzroy Street and Fitzroy Square.

FitzRoy built for the upper classes, but they soon migrated south-westwards to Belgravia and Mayfair, forcing subdivision of the aristocratic houses into workshops, studios and rooms to let.

Immigrants from France and neighbouring countries crowded in and helped establish the district as a centre for the furniture trade by the end of the 18th century. Thomas Chippendale was among the craftsmen who set up shop here. The historically bohemian area was once home to such writers as Virginia Woolf, George Bernard Shaw and Arthur Rimbaud. 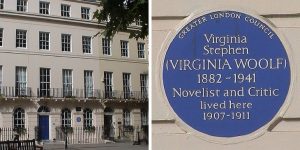 The east and south sides of Fitzroy Square were designed by Robert Adam in 1794 and survive in their original form, in Portland stone, though with extensive restoration of wartime damage on the south side. Wide streets lined with tall buildings in Victorian brick mingle with cosy side alleys where there is a variety of architecture styles from the eighteenth century to the present day, all of it dominated by the BT Tower, one of London’s tallest and most iconic buildings.

Reasons to reside in Fitzrovia

The Sunday Times in its annual trawl of the best places to live in London named the neighbourhood as its first choice in 2016. This was based on statistics on crime, school performance, life expectancy, house prices and services such as transport links, They also considered whether there were good pubs and places to eat as well as a true community spirit. This comes at a premium as the average property price is £1,473.00.

The area is very well served by public transport and has one of the lowest rates of car ownership in the UK with many people choosing to walk or cycle to get around There are six tube stations: Great Portland Street, Warren Street, Euston Square, Goodge Street, Tottenham Court Road, and Oxford Circus. Marylebone, Euston, Charing Cross, Kings Cross, and St Pancras International mainline rail stations are also within walking distance (less than 1.5km) of the neighbourhood.