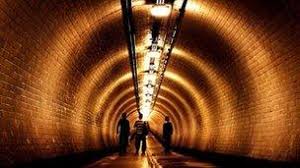 Ever wondered what lies beneath your feet in London? There is so much history buried beneath the pavement. Here we share just a few secret sights hidden from view.

This dismal 1970s office block houses the remains of a wealthy Roman house and bath complex in the basement. Look for the dog paw print on a tile and fine brickwork. Excavations continue but it now opens for regular tours. Go to: Billingsgate Roman House

Step back in time and experience the secret bunker where Prime Minister Winston Churchill and his War Cabinet met to plot the country’s course to victory in World War II. The War Room opened to the public in 1984 and a dedicated Churchill Museum was added in 2005.

Glorious post-war rebuild of Christopher Wren’s church, long since adopted by Fleet Street journalists, with a fine crypt partly revealed by the Blitz. See the Saxon apse, Roman mosaic and printing exhibition. If you’re lucky, they may show you the ossuary. 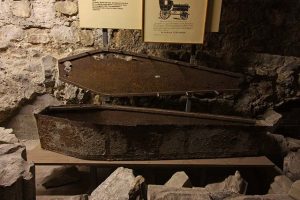 Journey back in time on a specially made train through the original tunnels and station platforms under Mount Pleasant Post Office.

Take a ride on Rail Mail from 4 September 2017 and experience 20 minutes of immersive underground exploration on our miniature trains. There’s even a surprise or two. Open everyday from 4 September onwards (except 24-26 December) from 10.00 – 17.00. The last train departs at 16.30.

Atmospheric, early-20th century tiled tunnels, two miles apart, running under the Thames and accessed by huge lifts and spiral staircases. The Greenwich Tunnel is currently trialling use by cyclists (who use it anyway). Go to: Greenwich & Woolwich Foot Tunnels for lift closures.

This second-century amphitheatre, built partly to entertain troops from the Roman fort at the Barbican, was rediscovered during the 1980s rebuild of the City’s very fine art gallery. It held 6,000 people (Rome’s Colosseum held 80,000) – but sadly no lions.

Pubs near Newgate Gaol used to offer ‘Hanging Breakfasts’ – with views – in the 19th century. The Viaduct a Victorian gin palace in its own right, has old Newgate cells in its basement. If it’s quiet, staff are happy to show you. If not, there’s always the gin. 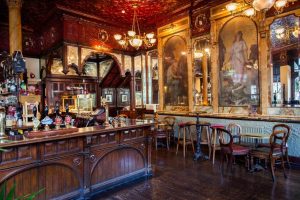 Chancery Lane Tube station also hides a wartime secret. The deep-level shelter and an extensive network of tunnels were used as a government wartime communications centre.

Later, it became a storage space for the Public Records Office and was bought by BT and became the Kingsway Telephone Exchange. The tunnels have been disused since the 1980’s and are on occasion open for private tours.

Also at Chancery Lane station you will find The Silver Vaults . Prosperous late Victorians used to store their valuables here, but since the Second World War the underground vaults with their massive prison-style doors have been used by silver dealers who are not only welcoming but fantastically knowledgeable.

There were eight deep-level air raid shelters built beneath London underground stations during the Second World War, to provide shelter from the bombings. Each one was designed to accomodate around 8,000 people and you can find them at Chancery Lane, Belsize Park, Camden Town, Goodge Street, Stockwell, Clapham North, Clapham Common and Clapham South, where the London Transport Museum occasionally arranges tours.