This months popular central London location is Knightsbridge. Here we give an overview on its history, architecture and the reasons to choose this area as your neighbourhood. Cosmopollitan,chic and expensive, this prime location in West London to the south of Hyde Park continues to attract the world’s elite.

Knightsbridge was not always associated with such splendour. The area has a long history that stretches back hundreds of years, Knyghtesbrugg 1364, that is ‘bridge of the young men or retainers,’ from Old English. It was only in the 19th century that it began to develop into the area we know today. There is a certain amount of ambiguity associated with Knightsbridge’s past, it formed almost out of nothing and there is debate over the origins of its name.

1. a duel between knights

2. according to a topographer named Norden, the bridge was locally known as ‘Stonebridge’ until a knight called Sir Knyvett was attacked while walking across the bridge late at night. The knight managed to better his attackers and ‘slew the master thief with his own hand’. This tale of Sir Knyvett’s valour supposedly gave a new name to the bridge.

3. a claim that the bridge may have been used by wealthy residents, the ‘knights and ladies’ rather than the common folk.

4. a claim that the area was used as a meeting place for local youths – where ‘knight’ was a slang term for ‘lad’. Even the original name of the area has come under scrutiny with some claiming it was called ‘Knightsbrigg’ while others believe it was ‘Kynesbrigg’.

In February 2007, the world’s most expensive apartment at One Hyde Park sold off plan for £100million, bought by a Qatari prince. Two to three-bed flats are £3million to £8 million and larger four-bedroom flats are £7million-£30million 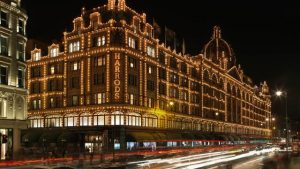 Knightsbridge is a multicultural centre and internationally recognised address and attracts international residents. Families are drawn to the area due to the good local schools of which the majority are private and the state schools are highly rated by OFSTED. The amenities are excellent with Harrods legendary food hall and Harvey Nichols on your doorstep. There are top restaurants to include Michelin-starred Outlaw’s at the Capital, Gordon Ramsay’s Petrus and Dinner by Heston Blumenthal. The V&A, Science and Natural History museums are nearby.

The area is home to several open spaces including Hyde Park, Kensington Gardens.